Read More About Our Rich History 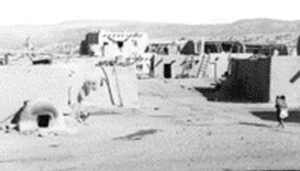 The Pueblo of Jemez (pronounced “Hay-mess” or traditionally as “He-mish”) is one of the 19 pueblos located in New Mexico. It is a federally recognized American Indian tribe with 3,400 tribal members, most of whom reside in a puebloan village that is known as “‘Walatowa” (a Towa word meaning “this is the place”). Walatowa is located in North-Central New Mexico, within the southern end of the majestic Canon de Don Diego. It is located on State Road 4 approximately one hour northwest of Albuquerque (55 miles) and approximately one hour and twenty minutes southwest of Santa Fe.

Having originated from a place called “Hua-na-tota,” our ancestors, the Jemez Nation, migrated to the “Canon de San Diego Region” from the four-corners area in the late 13th century. By the time of European contact in the year 1541, the Jemez Nation was one of the largest and most powerful of the puebloan cultures, occupying numerous puebloan villages that were strategically located on the high mountain mesas and the canyons that surround the present pueblo of Walatowa. These stone-built fortresses, often located miles apart from one another, were upwards of four stories high and contained as many as 3,000 rooms.

The Pueblo of Jemez is an independent sovereign nation with an independent government and tribal court system. Our secular Tribal Government is led by our Tribal Council, the Jemez Governor, two Lt. Governors, two fiscales, and a sheriff. Interestingly, for reasons discussed later, our 2nd Lt. Governor is also the governor of the Pueblo of Pecos. Traditional matters are still handled through a separate governing body that is rooted in prehistory. This traditional government includes the spiritual and society leaders, a War Captain and Lt. War Captain. Through perseverance, our people have managed to preserve our traditional culture, religion, and knowledge of our ancient traditional ways regardless of outside pressures. We have also preserved our complex traditional language, a language the anthropologists and linguists refer to as “Towa”. Jemez is the only culture that speaks this language, and our traditional law forbids our language from being translated into writing in order to prevent exploitation by outside cultures.

Having originated from a place called “Hua-na-tota,” our ancestors, the Jemez Nation, migrated to the “Canon de San Diego Region” from the four-corners area in the late 13th century. By the time of European contact in the year 1541, the Jemez Nation was one of the largest and most powerful of the puebloan cultures, occupying numerous puebloan villages that were strategically located on the high mountain mesas and the canyons that surround the present pueblo of Walatowa. These stone-built fortresses, often located miles apart from one another, were upwards of four stories high and contained as many as 3,000 rooms. They now constitute some of the largest archaeological ruins in the United States. Situated between these “giant pueblos” were literally hundreds of smaller one and two room houses that were used by the Jemez people during spring and summer months as basecamps for hunting, gathering, and agricultural activities. However, our spiritual leaders, medicine people, war chiefs, craftsmen, pregnant women, elderly and disabled lived in the giant pueblo throughout the year, as warriors and visitors could easily reach at least one of the giant pueblos within an hours walk from any of the seasonal homes. In addition, impenetrable barriers were established with cliffs to guard access to springs and religious sites, to monitor strategic trail systems, and to watch for invading enemies. In general, the Jemez Nation resembled a military society that was often called upon by other tribal groups to assist in settling hostile disputes.

Our people experienced their first contact with Europeans in the form of Spanish conquistadors in the year of 1541. When the Coronado Expedition entered into the area, exactly 40 peaceful years went by before contact between the two groups was experienced again. The Rodriquez-Chamuscado Expedition entered the area in 1581, followed by the Espejo Expedition in 1583. In the year 1598, a detachment of the first colonized expedition under the direction of Don Juan de Onate visited the Jemez. A Franciscan priest by the title of Alonzo de Lugo was assigned to our people and he had our people build the area’s first church at the Jemez Pueblo of Guisewa (now Jemez State Monument on State Highway 4 in Jemez Springs). According to our intricate oral history, as well as early written Spanish records (Espejo Expedition 1583), the Jemez nation contained an estimated 30,000 tribal members around the time of the Spanish contact, indicating that the population of the Canon de San Diego was probably three times larger than what it is today. Unfortunately, the peace between our differing cultures did not last long and the Jemez population soon became decimated as a result of warfare and diseases introduced by the Europeans.

During the next 80 years, numerous revolts and uprisings occurred between the Jemez people and Spanish, primarily due to Spanish attempts to Christianize our people by force, and congregate them into just one or two villages, where the Franciscan missions were located. As a result, numerous people were killed on both sides, including many of the Franciscan priests. By the year 1680, the hostilities resulted in the Great Pueblo Revolt, during which the Spanish were expelled from the New Mexico Province through the strategic and collaborative efforts of all the Puebloan Nations. This was the first and only successful revolt in the United States in which a suppressive nation was expelled. By 1688, the Spanish had begun their reconquest in force under General Pedro Reneros de Posada, acting Governor of New Mexico. The Pueblos of Santa Ana and Zia were conquered, and by 1692, Santa Fe was again in Spanish hands under Governor Diego de Vargas. Four more years would pass before the Jemez Nation was completely subdued and placed under clergy and military rule. Our ancestors were moved and concentrated into the single Village of Walatowa where we presently reside today. As a result, the most significant of our ancestral sites are now located just out of view of the Pueblo on federal lands and are no longer controlled by our people. Regardless, our ancestral lands are still held in the highest esteem by the Jemez people and not a week goes by that they are not paid tribute to through our prayers and religious offerings.

In the year 1838, Jemez culture became diversified when the Towa speaking people from the Pueblo of Pecos (located east of Santa Fe) resettled at the Pueblo of Jemez in order to escape the increasing depredations of the Spanish and Comanche cultures. Readily welcomed by our ancestors, the Pecos culture was rapidly integrated into Jemez Society, and in 1936, both cultural groups were legally merged into one by an Act of Congress. Today, the Pecos culture still survives at Jemez. Its traditions have been preserved, and as previously noted, the Pueblo of Jemez still honorably recognizes a Governor of Pecos.

Our people are internationally known for arts and crafts. Pottery such as bowls, seed pots sgraffitto vessels (elaborately polished and engraved), wedding vases, figurines, holiday ornaments, and our famous storytellers are now in collections throughout the world. In addition, Jemez artisans also create beautiful basketry, embroidery, woven cloths, exquisite stone sculpture, moccasins and jewelry. Our people are also known as “runners” many of whom still hold unbroken records at major national events, and continue to set new records with each generation entering into track and field competition.

Traditional dances are still held throughout the year at Jemez, many of which are not open to the public. The public is welcome to share in certain events, particularly the “Nuestra Senora de Los Angelas Feast Day de Los Persingula”, August 2nd (Pecos Feast of St. Persingula), the “San Diego Feast Day” on November 12th. Additional events open to the public occur at various times throughout the Christmas Holidays. Information regarding these events can be obtained at the Walatowa Visitor Center at the Pueblo of Jemez. Cameras, video camcorders, tape recorders, sketchpads, alcohol and firearms are strictly forbidden at these and all events by the order of the Governor. No authorized publication information regarding Pueblo activities allowed.